Morning Fun with our Yard Critters! 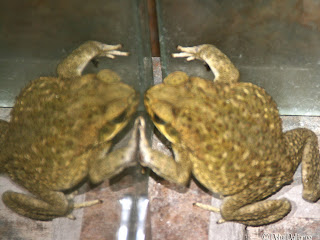 There is nothing like stumbling out of bed in the early morning hours for your first "pit stop" and having a frog hop across the floor right by your feet so close you feel the swoop of the wind as he hops by!  It certainly makes you wake up a little faster as your mind orients itself as to what just happened and you then begin to plan on how to remove this little creature out of the house and back to the yard where he resides.  I am certainly not touching a frog you know!

He was quiet amusing to watch as he appeared to be a bit startled by my presence and he hopped himself right into the glass enclosed shower where he continued his efforts to escape and became a bit distraught that he could clearly see where he intended to go but just could not seem to get there! 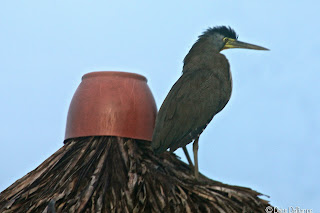 We promptly removed our little Kermit friend back into his familiar surroundings and then I noticed that old familiar loud croaking frog sound coming from the back yard . . .


The BIRD was back!

The Bare Throated Tiger Heron that is!  I wold recognize that sound anywhere!  I walked out into the yard and checked the wall where he sat on his last visit . . . but no bird there.  Then I spotted him way up on top of our palapa topped outdoor banos.  Sitting there gracefully taking in all of the early morning sights and sounds.  To learn more about this interesting feathered friend click the link and read . . . . 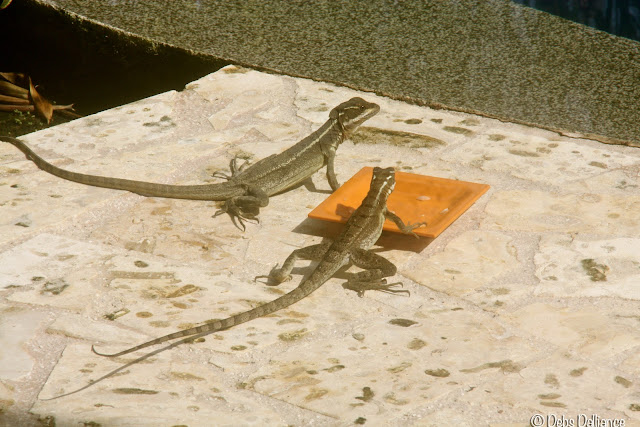 If shower taking frogs and birds that croak aren't enough to shake up your morning there is also the J. C. lizards and Iggy the Iguana who were lounging about in hopes that they might get fed a little breakfast.  When these guys see you coming with something to eat they come running to chow down!  The Loco kids are your typical siblings and the big brother dominates the bowl and will run the little guy off.  Today I decided to try 2 separate bowls to see how that would work and served them up some leftover chicken.  But Big Brother was his usual self and was dominating both bowls!  After a while they both seemed to get their bellies full and Iggie the iguana was chomping on some mango.  He was not to keen on eating out of the bowl and would jerk his head back so we tried a plastic plate.  That was working better but I don't think the mango was what he really wanted today because when we sat it on the wall he grabbed the plate in his teeth and tossed it right back at us!

Oh the Joys of the Jungle!  Only in Costa Rica!

Please enjoy all of my photos from our fun morning with the critters!


Backyard Critters from Deb's Dalliance on Vimeo.
Posted by Debbie Hutchins at 8:01 PM